This blog post will expand on a video by Pat Condell which I’m very fond of called Absolute Certainty – the ways in which religious people offer absolute certainty through their belief systems, and how it is neither true nor a clear minded way to go about your life. In this article, I want to take a few moments to clear up the difference between what people know and what people believe. Some people may not see the difference between the two, but with a few moments of thinking on the matter it becomes clear that there is a separation.

I felt it necessary to write this blog after debating with Christians on the internet about the origins of the universe, their creationist theories and their view on the afterlife (among several other things). What upset me was the way they talked as if they had no doubt in what they were saying, they used scripture as fact, and in my opinion, this is more than silly. As I debated with them, I made a point to clearly express my agnostic standpoint on the physical and spiritual aspect to the world we live in, I would never claim to know how this amazing universe began or whether my beliefs are fact. Personally, I think that anyone who thinks they know the answers to these questions (from both a religious or scientific stand point) is both an idiot and a closed minded fool. Thus, as previously stated, I always make it clear that I am agnostic and open to absolutely any possibility, including the barbaric God of the Bible – and I’m not ashamed or embarrassed to admit that; whereas they’re open to absolutely nothing, and accuse me of being “pretty sick” for even considering the idea of humans having a common ancestor with apes. Similarly, they say they know that when we die, the theory of God’s judgement over man for his sin is the way things will unfold. It’s not “I believe it will happen”, it’s “I know it will happen, and you’ll be sorry when it comes true.” However, as you haven’t died and neither have I, you can’t guarantee anything of the sort, just as you can’t guarantee Muslims or Jews are wrong, or for that matter the flying spaghetti monster. So, the difference between knowing and believing is the inability to deny fact on a basis of demonstrable theory through practise. To this end, knowing automatically includes believing because it goes beyond it. For example, I know that gravity is a real force. I believe that if I picked up a penny and dropped it, gravity would take hold and it will fall to the ground. I can put this into practise by doing so and every time I drop the penny it hits the floor, therefore I know gravity exists.

However, what is written in the scripture is not fact. To read that God made the universe in seven days and believe it is fine, to believe that God will judge all men at the end of their lives is fine, to believe that judgement day will come and this entire existence will no longer exist is fine, to believe I am a sinner and I will burn in eternal fire for not obeying your God is fine (if somewhat offensive) – but to say you “know it is true” isn’t fine at all. The basis for this is that you can’t put the creationist theory into action. You can’t say “okay, God made the world in seven days, let’s test that in a lab” or “let’s try that scenario in action” because it’s a theory that works on superstition and, for want of a better word, magic. However, you can use science to rectify this, by picking holes in the God theory with scientific practise, such as carbon dating and fossils which automatically disprove the idea of the world being 6,000 years old. I’m not here to disprove religion though; that would be a stupid idea. I just want to point out that nobody, not even the smartest scientist, knows source of man and his surroundings without a doubt – even Richard Dawkins (evolution expert) happily answers the theory of a God existing, he just doesn’t believe it’s likely based on what we’ve learnt and continue to learn – in the same respect that I (and a lot of other atheists) do.

So, there you go, feel free to believe what you wish – I’d never seek to quash the right of freedom of choice in such a belief, but don’t claim to know anything when it comes to the source and expiration of man’s existence, because you haven’t experienced either.

Thanks for reading, below you can find the original video by Pat regarding this subject. Enjoy! 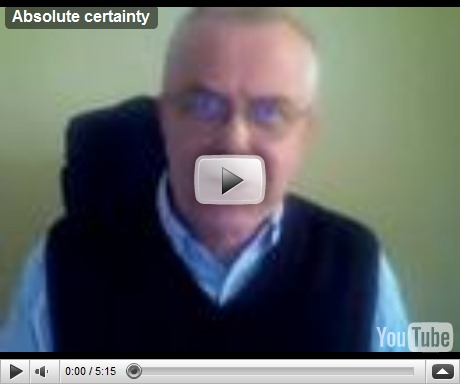